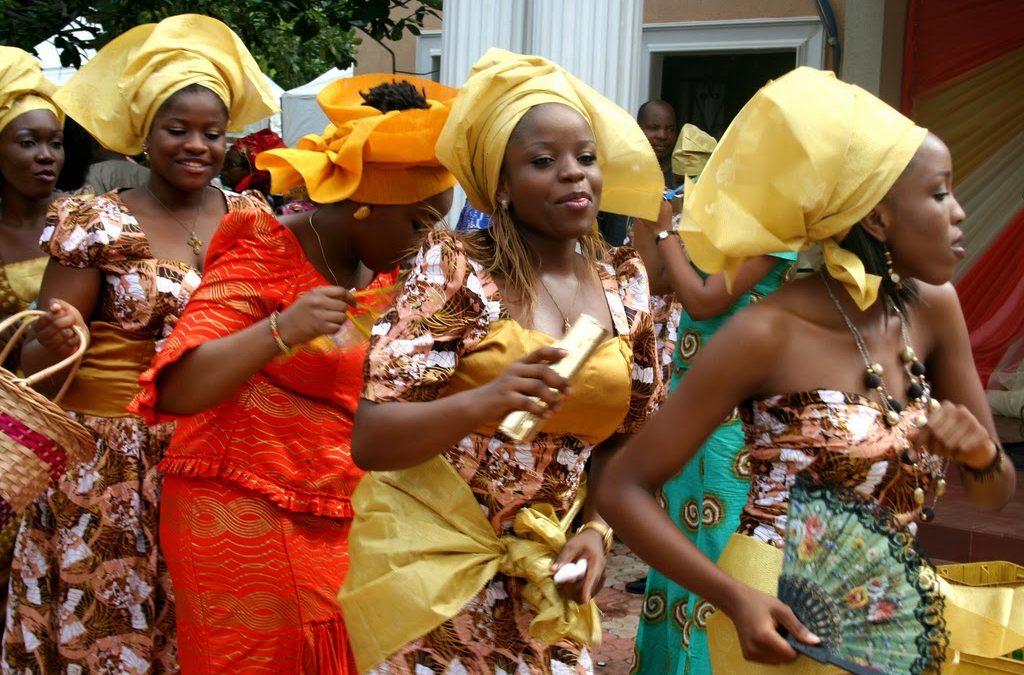 Oscar-nominated designer Ruth Carter takes us on a guided tour of her exquisite fashions and explains their authentic African origins.

Even before Black Panther premiered in theaters, costume designer Ruth Carter saw her Instagram feed blowing up with fans emulating the film’s style. That’s unlikely to change anytime soon. Director Ryan Coogler’s record-breaking film is easily the best-looking Marvel movie to date, in large part because of Carter’s dazzling vision of fashion in Wakanda. Carter’s prestigious résumé includes Oscar-nominated designs for Malcolm X and Amistad, along with costumes for beloved films like Selma, Serenity, and Love & Basketball. But Black Panther presented a unique challenge: creating the look of an African society that was both untouched by Western influences and more technologically advanced than any nation in the world. As Carter told Yahoo Entertainment, she turned to ancient African tribal designs for her inspiration, then remixed those elements to create a futuristic, cutting-edge fashion aesthetic that, not incidentally, makes everyone in the movie look fabulous. It’s no wonder the film is already showing its influence on the fashion world. Carter spoke to Yahoo about creating the film’s many distinct tribal looks, her source for the royal family’s stunning jewelry, the inspiration behind Michael B. Jordan’s sexy Killmonger street look, and the secret superhero element she worked into Letitia Wright’s Shuri wardrobe.

Yahoo Entertainment: The concept of Wakanda as an African nation that was never colonized by the Dutch or British is so powerful. How did that inform your design choices?
Ruth Carter: I discovered so many things about Africa that I didn’t know — like, the cloth that we normally see in many African-inspired things, the wax cloth, was brought in from the Dutch. There are influences of the British; when you see a Nigerian wedding, you’ll see a Nigerian traditional drape and a guy with a top hat on. [laughs] So you have to dig deeper and go to the indigenous tribes of Africa. You’re not a real historian, you’re just kind of the temporary historian for the picture, so you’re looking at beadwork and you’re looking at carvings and you’re looking at masks. And you’re being inspired by patterns. There are a couple of patterns that I saw repeated throughout the continent: one is like a checkerboard, another one is a triangle.

And I looked at books on African ceremonies, since ceremonies reminded me of precolonization. So for example, the Dogon tribe were the first astronomers. They do a ceremony once a year where they adorn themselves in these brilliant raffia skirts and wood-carving masks that shoot up to the stars — they’re really tall. And they do these moves that sweep the earth. I was fascinated by that. So Ryan wanted the Jabari to wear grass skirts during battle, and the Dogon was the perfect place to start with the inspiration. We used the wood carving design for the armor for the Jabari. So when we see Winston Duke (as M’Baku), he really is representing the Dogon tribe of ancient Africa.

And then the Dora Milaje were inspired by many indigenous tribes of Africa. The color was the brilliant red of the Maasai. When you see these pictures of them with their beadwork, you see this red that is just so prominent and so strong, and really beautiful with these bald heads, and they stack beads, and it’s just phenomenal. So I upped the color of the design to be a much more brilliant red so they could have this part of Africa that was undeniable in its brilliance and in its color. Also their neck rings were inspired by the Ndbele tribe of South Africa. Ryan really wanted to use them, and it was his idea to have these neck rings and these arm bands to represent this form of adornment that we see throughout Africa. Using them as armor just felt very natural. But Ryan also said he wanted them to feel like jewelry, especially Danai [Gurira]’s. When you see Danai in the opening scene in Nigeria and she impales the guy behind her and she walks straight [toward the camera] — you see this gold just glimmering, and it’s very regal.

So those are kinds of ways that the costumes represented the ancient indigenous tribes of Africa. And I used so many books — I think everybody loves African art, I don’t know anybody who doesn’t, but we didn’t want to approach it from an anthropological point of view. Like the man with the lip plate. You see him with this lip plate, and you mostly see that in National Geographic, on a woman who’s bare-chested in her village, you know, cooking outside on a fire. But this way we honored it, and we made it classy and regal, and we gave the actor a beautiful suit to wear that represented the tribe, and we painted the lip plate to match the color of the suits, and we made it an outfit. So in those ways we gave it honor.

And I wanted to apply the art of the tribes to their costumes. For example, silver is a precious metal for the Tuareg, and that fit within the Wakandan ideology of vibranium, because vibranium is also silver. So I combined the silver from the Tuareg look with that aubergine-baby blue kind of mixture for the Merchant Tribe of Wakanda.

The same goes for the River Tribe. The cowry shell was a form of commerce [in West Africa], it was how they traded. And so I used a lot of the cowry shell on Lupita’s costume, and a lot of beads and shells because she represented the river and the water and the grass. So I had a wealth of resources of artistry to pick from.

You mentioned metal, which reminded me how amazing the jewelry is. Were those all custom pieces?
Ramonda’s earrings are bought from this man in Atlanta, and I’ve been looking for his name since then. He came into my shop, this old guy chewing on a licorice root.

He had everything rolled up in a black cloth, and he unrolled it, and then there those earrings were! And I just bought some things from him. But much of the jewelry was handcrafted by Douriean [Fletcher], who I hired — she’s a jewelry designer who I met and I really liked her aesthetic, I liked her work ethic, and I felt that the jewelry of Wakanda needed to have this hand-tooled look that would also be reminiscent of the craftsmanship of Africa and of ancient Africa. So I started everything with a prototype that was made of metal, and then we molded it and were able to recreate the jewelry in rubber and paint it to look like metal.

I want to talk about a couple specific characters.  Wakandan princess Shuri (played by Letitia Wright) has such a distinctive fashion sense. What was your inspiration for her?
When we first meet Shuri, the tradition is uncomfortable for her — she says, “Can we get this over with? This corset is really tight.” So that informed the rest of the story. When we first meet her at the airstrip and she asks T’Challa if he froze — she’s the one who’s wearing the cape! She has a little cape on her costume. All of her costumes were inspired by fashion, were inspired by new technology. When we see her in her lab, I didn’t want to use a lab coat.

I wanted to present these overlays — everything was overlaid, and I wanted the overlays to feel as if they were different recycled fabrics. So I chose carefully whether it was a mesh, or a sheer white kind of a sweatshirt-y feel. Also, I wanted her colors to be young and fresh, and her look to be that of, not a 15-year-old, not a preteen, but of a girl who’s going from teenage to womanhood.

I also want to talk about Erik Killmonger’s street look when he first see him in the museum, with the denim jacket. It’s such an unexpected look for a villain, sexy and geeky and cool.
In one of the first versions that we read, Killmonger was an anthropologist. And we thought, when you think of the stereotype of an anthropologist, you think of a tweed coat and slacks, like he’s coming from the university. And Ryan really wanted him to feel like he was basically urban, he was unapologetic about his look. He was learned, which is where the glasses come in, but we gave him drop-crotch pants, Balmain boots, a shearling denim jacket, and an oversized T-shirt.

He’s also wearing some kind of African beads, so there’s a little bit of culture there. There are signs that he has a connection to his past but it’s not overt. He is representing the Lost Tribe, so we needed to make him really feel like an African-American urban cat, you know, an urban guy, and have the security surround him as if they don’t really know what to make of him — is he a thug? What is he? And so it just really plays him against T’Challa really great, because T’Challa comes from a place that’s never been colonized, he was raised a prince, and so his look is completely the opposite.

This movie is looking to be hugely influential in the fashion world. You’ve done so many iconic films; is that an experience you’ve had before, of seeing designs inspired by your films on the runway or in stores?
I have not had this experience before. I feel like we’ve got an opportunity here to have a voice and shape the world in a sense, and that’s where fashion comes in. If that’s what people want to buy, the fashion industry usually provides that. And if the Panther film has influenced people to want to wear these things — I see it on my Twitter feed all day long, I see it on my Instagram all day long. People are re-creating the fashions because they feel a connection to the story, they love the story so much, and so I feel like the H&Ms and all those people will have their Wakandan vibe in some of their clothes. And hopefully it won’t go out of style like most things in fashion sometimes do. Because it’s a movement more than a fashion statement.