Democrats Win the Senate as Ossoff and Warnock Defeat Their Opponents. 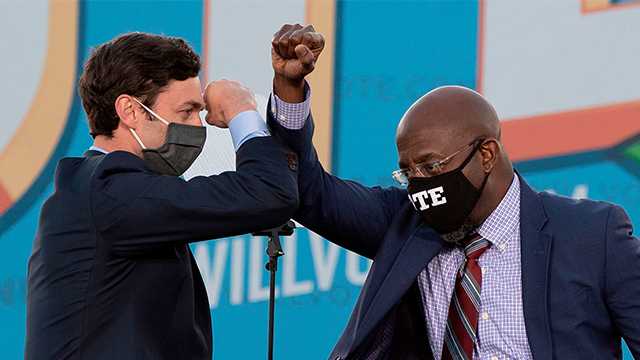 Here’s what you need to know:

Democrats took control of the Senate on Wednesday with a pair of historic victories in Georgia’s runoff elections, assuring slim majorities in both chambers of Congress for President-elect Joseph R. Biden Jr. and delivering an emphatic, final rebuke to President Trump in his last days in office.

The Rev. Raphael Warnock defeated Senator Kelly Loeffler, becoming the first Black Democrat elected to the Senate from the South. And Jon Ossoff, the 33-year-old head of a video production company who has never held public office, defeated David Perdue, who recently completed his first full term as senator.

Both Democrats now lead their defeated Republican opponents by margins that are larger than the threshold required to trigger a recount under Georgia law.

The Democrats’ twin victories will reshape the balance of power in Washington. Though they will have the thinnest of advantages in the House and Senate, where Vice President-elect Kamala Harris will break 50-50 ties, Democrats will control the committees and the legislation and nominations brought to the floor. That advantage will pave the way for at least some elements of Mr. Biden’s agenda.

Mr. Ossoff’s victory comes at a moment when the nation’s political leadership has been paralyzed by a pro-Trump mob that stormed the Capitol and halted the formal accepting of the Electoral College results by Congress. The day’s extraordinary proceedings — rioting interrupting the peaceful transition of political power — crystallized the campaign the Georgia Democrats ran against their Republican opponents, both of whom pledged to seek to overturn the results of the presidential election to keep Mr. Trump in office.

The Republicans’ losses in a state that Mr. Biden narrowly carried in November, but that still leans right politically, also amounted to a vivid illustration of the perils of embracing Mr. Trump. He put his diminished political capital on the line with an election eve appearance in Northwest Georgia. And Mr. Perdue and Ms. Loeffler unwaveringly embraced the president throughout the runoff races even as he refused to acknowledge Mr. Biden’s victory and brazenly demanded that Georgia state officials overturn his loss in the state.

The political fallout of Mr. Trump’s tenure is now clear: His single term in the White House will conclude with Republicans having lost the presidency, the House and the Senate on his watch.

Mr. Ossoff and Mr. Warnock won thanks to a frenetic get-out-the-vote push that began immediately after the November election, when no candidate in either race claimed the majority needed to avoid a runoff. Driving turnout among liberals and Black voters in the early-voting period, Democrats built an insurmountable advantage going into election day.

They won thanks to overwhelming margins in Georgia’s cities, decisive victories in Georgia’s once-Republican suburbs and because of lackluster turnout on Tuesday in the rural counties that now make up the G.O.P. base.