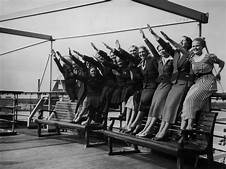 Stephen B. Jacobs has a warning from the past for America today: It’s happening again.

At 79 years old he is among the youngest of the Holocaust survivors still alive. But Jacobs can remember life in the Nazi concentration camp at Buchenwald; what the Nazis did to him, his family, his friends.

He worries about what’s happening right now in America, where he has lived and prospered since arriving a couple of years after Buchenwald’s liberation on April 11, 1945.“Things just go from bad to worse every day,” Jacobs, a successful New York architect who designed the Holocaust memorial at Buchenwald, tells Newsweek. “There’s a real problem growing.”

So much so that Jacobs thinks there’s a “direct parallel” with Germany between the two world wars.

Perhaps more alarming than the far-right getting braver is the seep into mainstream politics of their hate, their talking points, their rhetoric. “It feels like 1929 or 1930 Berlin,” Jacobs says, ahead of Holocaust Remembrance Day 2018 on Thursday.

“We thought our country had changed. In fact, it didn’t. We were operating on a misconception. ‘My god, we elected a black president in the United States! Look how far we’ve come!’ We haven’t.”

In Trump, Jacobs says, the far-right sees an “enabler.”

“I’m involved with New York real estate, I know this man personally,” says Jacobs, whose eponymous architecture firm celebrated its 50th birthday in 2017. “Trump is an enabler. Trump has no ideas. Trump is out for himself…...read more