The Olympics give us another chance to enjoy Serena Williams’ greatness 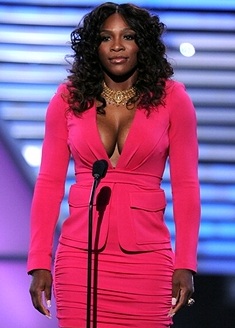 Serena’s consistent ass-kicking in singles has recently been coupled with the resurgence of her brilliant doubles partnership with Venus. The two have spent most of their respectively brilliant careers partnering in doubles on the side, winning 13 Grand Slams together between 1999 and 2012. They even won three Olympic gold The Olympics are not our only opportunity to watch Serena Williams be great. Unlike America’s swimmers, sprinters, divers, fencers, volleyballers, judokas and shotputters, Williams gets to play in multiple tournaments on global broadcasts every year. But Rio certainly is another opportunity to watch Williams be great. And she’s so great, we really shouldn’t pass those chances up.

As of right now, Williams is tied for the lead in two career-defining categories. Winning at Wimbledon brought her individual Grand Slam titles to 22, which ties her with Steffi Graf for the Open Era record. And she and her sister Venus have four Olympic medals each, all gold, which ties them with Reginald Doherty, a Brit who won three golds and a silver back in the 1900s. Venus and Serena both have good chances at earning medals in the doubles portion to bump them up to five, and Serena should medal in singles to get her up to six and make her the most decorated tennis Olympian of all time.

Serena has been winning majors since 1999, longer than this year’s youngest Olympians have been alive. And she’s been No. 1 in the world rankings for 178 weeks. And yet it doesn’t get old. After 17 years, you’d think cracks would come to the surface. But they haven’t: Williams’ power still overwhelms everybody and her finesse is still finer than the field’s. And you’d think that after 17 years, it would become boring. But a Serena tour de force is still an incredible medals together, in 2000, 2008 and 2012.

But their partnership took a bit of a break, in large part due to Venus’ wellness issues. In 2011, she was diagnosed with Sjogren Syndrome, an autoimmune disease that caused her to drop to 105th in the world rankings, her first fall out of the top 50 since 1997. And in 2013, she had a back issue. With Venus struggling to maintain her health, doubles tournaments became superfluous. The sisters skipped the majority of Grand Slams between 2011 and 2015, including all four last year.

Now Venus is back. Her trip to the semifinals at Wimbledon was her first Grand Slam semifinal since 2010, and she’s the world’s 8th-ranked singles player. With Venus healthy, the band has gotten back together. They played together at the French Open for the first time since 2010 and then won Wimbledon, their first tournament victory in four years — since the last Olympics. There’s no doubt that the chance to make Olympic history was part of the reason the Williams sisters reunited. In the spirit of acknowledging that nothing is given, we should note that it is, in fact, possible for Serena to lose. She fell in the finals of this year’s Australian Open to German Angelique Kerber, and she stunningly lost to Italian Roberta Vinci in the semifinals of last year’s U.S. Open. She also lost twice this year on hard courts in non-majors — to Russian Svetlana Kuznetsova in Miami and to Belarussian Victoria Azarenka at Indian Wells.

Of course, Serena has won in Australia and Flushing a combined 12 times — but in the past year or so, she’s lost more tournaments on hard courts than she’s won, which isn’t normal for her. The hard courts in Rio could prove to be her toughest challenge.

The Olympic tennis field is about half as big as most Grand Slams, so it’ll only take up the first week of competition, beginning on Aug. 6. The women’s singles final is Aug. 13 and women’s doubles gold will be awarded Aug. 14.